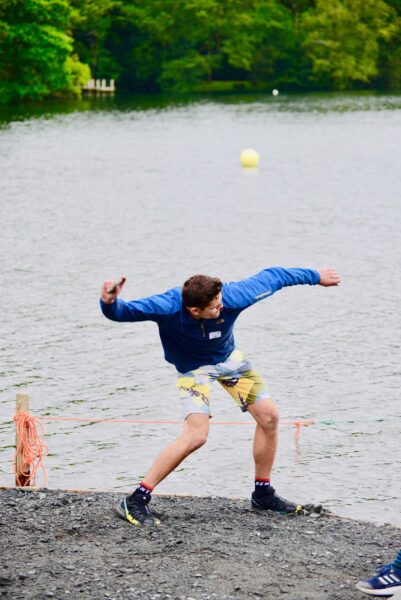 Tomorrow, almost incredibly, I will see my 11th All-England Stone Skimming Championships take place, at the fourth venue to have staged it – Fell Foot Park at the southern end of Windermere.

I can remember the day I was first asked to make contact with the then organiser, Ben, and the afternoon I trotted along to his office to see a bucket bulging with stones in the reception area. “Will this ever take off?” I thought, as Ben explained his vision to me. But, I’d always loved stone skimming, so went with the flow.

I well remember the days when it alternated between Windermere and Coniston – my favourite definitely being the latter, just for the idyllic setting and, of course, the inaugural Mascot Skimming Championships that I staged there in 2009! The mental scars from that have really prevented its repeat, but I did almost consider re-enacting it this year. If it wasn’t on Coniston, however, it wouldn’t have been the same. Readers of my book, ‘Rogue Elephants: One Woman’s Journey Through the Human Jungle’ will perhaps understand why! It was also staged in what I always feel was a much better month – July. If only that were the case now, we might just get better weather.

The course nowadays isn’t the most popular – definitely not with champion skimmer, Ron Long, and the passing canoes and ripples from the boats sailing to Newby Bridge always make it interesting, but it does, at least, avoid the issue that left-handers had at the Wateredge Inn in 2010! That was a classic year, however, and I can’t actually remember when we had weather as good as that, or a beer garden as relaxed and ready to compete! In fact, I was asked last week whether there has ever been good weather at these Championships. How few remember the years before the regular deluges at Fell Foot Park!

I am once again reliably informed that SCRT have taken charge again and prepared both the skimming platform and course – none of us want to delegate that responsibility and have to endure another 2017 situation – so all should be well for an 11am start, rather than an approaching-midday kick-off!

Two years ago, both The Guardian and the Claudia Winkleman Show chose to focus on our female throwers, but last year it was the post-event PR that went crazy, thanks to the incredible skim by Alex Lewis (who I think may well have been the person to sort out the tangled rope in the 2017 boat debacle the year before). If it was, God bless that man and his Krypton Factor skills. He definitely saved the day!

What is for sure is that Alex smashed the record set the previous year (2017) by Gareth Twamley, skimming an incredible 95 metres and breaking Gareth’s 2017 record by 7 metres! It was a pleasure to get Alex the profile he deserved across the Scottish dailies and weekend titles last year, not to mention getting him on to the Chris Evans Show! We’ve already been in touch to arrange interviews this year and I’m somewhat proud that my Scottish friend and fellow ex-British Gas HQ London PR, Nancy, declared a few weeks ago “Oh, I read all about him last year.” Fame indeed.

We’re already on a roll towards a bumper year in 2019 press coverage-wise, with a huge amount of coverage pre-competition. There has been a ‘OK, breathe deep, ignore all the factual inaccuracies and count to 10’ moment today, but perhaps next year, we won’t be as generous with ideas such as the rock hunt that will take place this year. Perhaps, we’ll just hang up our boots and think life’s too short!

As Rogue Elephants readers will know, I was once told to smile through gritted teeth – in relation to a Chris Evans connection in fact, even if that was in the middle of Trafalgar Square, at a national press call! How these connections recoccur! There may be a lot of that art on demonstration tomorrow, or just grimacing, if one is pressed into giving TV interviews, as is often the case, or if raindrops are dripping off the end of the nose in the registration marquee! Wish me well. One thing’s for sure, the Three Flexiteers as I’ve named them – Alex Lewis, GaretH Twamley and Ron Long – probably don’t need you to wish them good luck. They’re all far too talented and, if they’ve read another of my releases, carefully watching stone skimming’s version of the ‘peloton’, lurking in the ‘field’ behind them. Dark horses are always a threat!