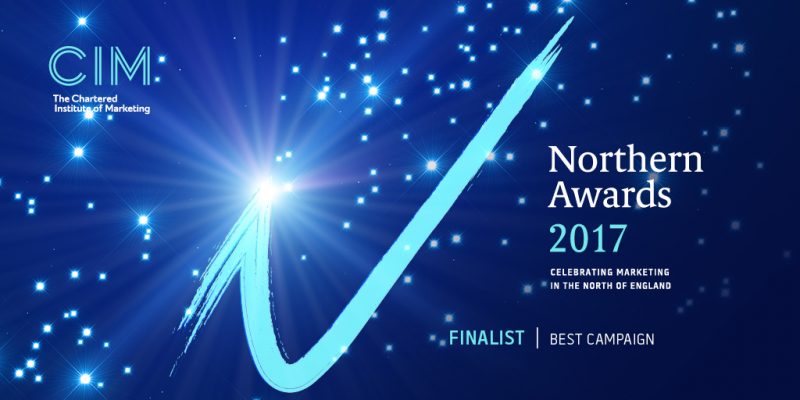 We’ve ended the week with some more marvellous news – five shortlistings in the CIM (Chartered Institute of Marketing) Northern Awards!

This adds to the four shortlistings we have in the Chartered Institute of Marketing PRide Awards and another four in the Northern Marketing Awards. To have 13 award shortlistings going into November is just amazing.

The other fantastic thing is that no other PR or marketing agency has achieved this feat across these three prestigious awards. These awards cover a vast geographical area – the whole of the north in two cases and the whole of the NW in the other – as well as covering work from both agencies and in-house departments. Our budget was pretty tiny, which just shows what creativity can do and how it can make a campaign box above its budgetary weight.

We’d already noted that we had more Northern Marketing Award nominations than any specialist PR agency, so this just further builds on that achievement.

To be achieving all this PR success for a client in Northumberland is also a huge morale booster. It should make clients across Northumberland, and in Newcastle too, recognise that they could benefit from working with a passionate PR agency outside of their county or city borders. We do, after all, have a base in Ashington, Northumberland!

It’s so rewarding to not just be benchmarked against the top PR and marketing agencies in the north, but to actually exceed what they’ve achieved. Hopefully, we will now be taken seriously and not hear things like ‘you’re too small’, ‘we want more capacity’ and ‘we need a Manchester agency’.

It isn’t easy to be based in an unfashionable area, to have Blackpool-based tourism attractions and Blackpool Council take their PR accounts to Manchester, just because they think city-based agencies are better, and to also not benefit from the media exposure that Manchester agencies enjoy. However, we’ve shown the spirit for the fight. Clients in Yorkshire, Northumberland, Cumbria, Northamptonshire, North Lancashire and Oxfordshire are benefiting from what we bring to the table, even if we’re ignored by those closer to home.

2017 has brought us more recognition than we’ve ever had during the past 20 years – even though we’ve been NW PR agency of the year, Small PR Team of the Year and a winner of a national ‘Campaign of the Year’ title.

Can we change perceptions of rurally-based consultancies? Let’s see. In the meantime, if any tourism attractions, or businesses on our doorstep in Blackpool or wider Lancashire, fancy looking closer to home, rather than spending more money unnecessarily in Manchester, we’re ready to leap into action!