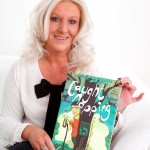 In the first week of National Pet Month, a new children’s e-book has taken the increasingly serious crime of dognapping as its theme. ‘Caught Napping’ – a Jonathan Jinks story by Gianna Hartwright – sees a teenage detective embroiled in the world of dognapping in which there was a 17% increase in 2012 – 3,500 reported dog thefts.

High profile celebrities affected by dognapping have been Sheridan Smith, Liz Hurley and the daughter of Bruce Forsyth. ‘Caught Napping’ was actually inspired by a breakfast TV interview with Bruce. Liz Hurley’s case also helped inspire the book and the character of Louella Loudon – a high profile actress whose Chihuahua is stolen.

Gianna Hartwright hopes that the e-book will raise the profile of the crime and encourage the police to take it more seriously. Some Forces are still putting cases in the hands of the local dog warden, rather than treating it as a crime that they should be investigating.

‘Caught Napping’ by Gianna Hartwright, sees teenager, Jonathan Jinks, become the target of a dognapping ring, which steals an Alsatian that he is walking for a pensioner.  Determined to show that he is not irresponsible, Jonathan sets about finding this dog, and others too, without any assistance from the police, which sets him on a path to either glory or disaster, particularly when his case takes on a high profile national dimension.

Caught Napping draws on actual situations that are occurring daily in relation to dognapping, all over the world. The facts are that:

…Dogs are increasingly being sold to order – thefts of Cocker Spaniels have risen dramatically since the Duke and Duchess of Cambridge got a Cocker Spaniel. Thames Valley Police dealt with 15 Cocker Spaniel thefts in December alone.

…Dogs are either sold on the black market, or exchanged for a ransom – just as in ‘Caught Napping’.

…Pedigree dogs are the new car radio when it comes to drugs money.

…A man in Peterborough was attacked while walking his dog, which a gang wished to steal.

…A lady in Yorkshire remortgaged her house to put up a £10,000 reward for her dog – in Caught Napping, the actress Louella Loudon has her Chihuahua stolen and puts up a huge reward.

…Dogs can be lured away from owners and bundled into white vans, or stolen from kennels and gardens, outside shops and even from within homes – just as in ‘Caught Napping’.

Gianna Hartwright says: “Caught Napping is targeted at 10/11 year-olds – the young pet owners of the future – and explores the crime of dognapping through the eyes of a teenager.  I hope it will help make dog owners of all ages more aware of what is going on in society, so that they take measures to prevent their dog being stolen and be extra vigilant”.

Gianna is hoping to work with schools, vets and dog charities, who can all potentially use her book as a tool to help raise the profile of the crime and help encourage micro-chipping.

If there is one book to buy for a dog loving child or grandchild during National Pet Month, this book with its powerful portrayal of the crime of dognapping is probably the one.  Hopefully, the younger generation can inspire all of us to keep our wits about us and protect our favourite friend.

‘Caught Napping’ can be downloaded at Amazon, Lulu or Kobo and costs £4.32.  The Organisations and schools wishing to have copies can contact Gianna Hartwright on 01253 891114.  The ISBN numbers are: