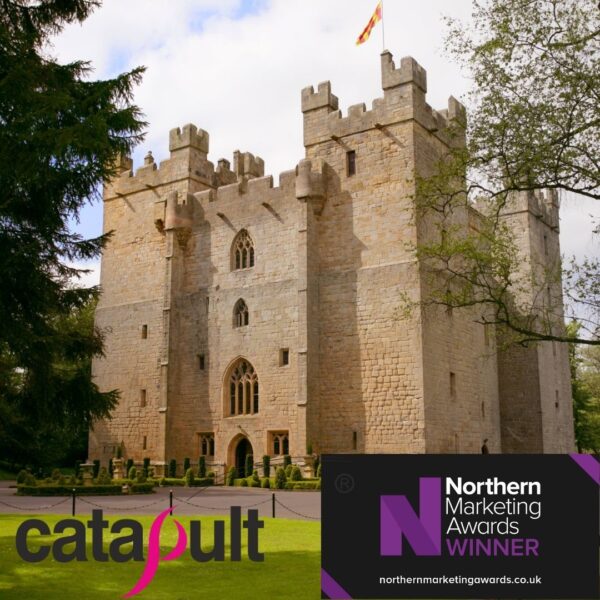 Catapult PR is ‘beyond happy’ to top the table at the prestigious Northern Marketing Awards 2020, winning more awards than any other PR, content, digital or advertising agency across the whole of the extensively defined ‘northern’ region.

As a Blackpool-based agency, competing against city agencies once again, we could hardly imagine that we would sweep to victory in such style, winning the award in the categories of Best PR Campaign, Best Tourism and Leisure Campaign and Best Retail Campaign. It’s not just the fact that we beat some of the biggest agencies and in-house marketing departments in the north to the spoils, but the fact we know their budgets will have dwarfed ours. There’s no substitute for creativity after all!

The Northern Marketing Awards results were announced at a virtual ceremony, allowing other attendees to comment on the winners. Even after Catapult had scooped just two of its three awards, one commentator noted, “Catapult smashing it.” The agency was a finalist for a further two awards as well, having been shortlisted for Best B2B Campaign and Best Sustainable/Green Campaign.

Catapult PR’s work for the first two award-winning campaigns was for Langley Castle Hotel in Northumberland, whilst Best Retail was for The Used Kitchen Company in London. The pro-active campaign conducted for Langley Castle resulted in the accommodation provider achieving a phenomenal and sustained 97% occupancy rate after the first UK lockdown, with the castle maintaining higher-than-normal bookings even last week.

The campaign for The Used Kitchen Company led to enhanced profile and engagement with a key target audience for the client – that of kitchen showrooms and manufacturers – as well as the launch of a groundbreaking UK recycling initiative in the form of ‘Kitchen Passports’.

What else can we say, other than that we have scooped six awards thus far in 2020, having won two PRCA DARE Awards and been named Public Relations Firm of the Year in the North England Prestige Awards, prior to winning our three Northern Marketing Awards.

Our awards cabinet is now overflowing, with 41 awards and more than 70 finalists’ accreditations in total. We may even need a second now! Ahead of 2021 and new marketing budget setting, we are also determined to drive home the message that big agencies just eat up marketing spend unnecessarily and we are here for any business that wants to spend its money with specialists, paying for expertise, rather than for city premises and prices.

If you need advice on any aspect of marketing with which you feel Catapult PR could exist during lockdown or thereafter, call 01253 446925 and we will do as much as possible to guide you and help inform your thinking, during these difficult times. Yours could be the next award-winning campaign, whether you are in tourism and travel, retail, insurance, the pet sector, community relations or other sectors in which awards have been ours for the taking.