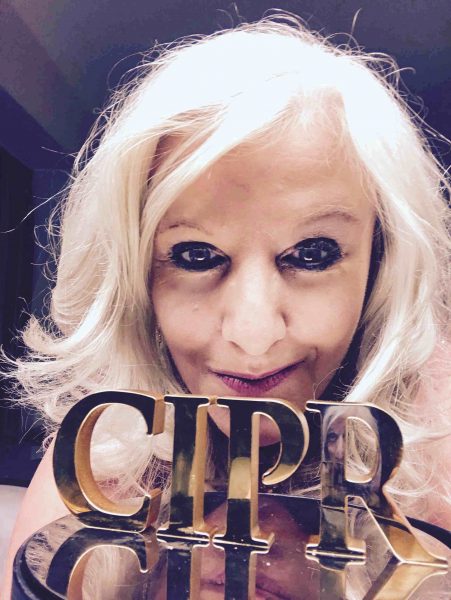 A 20-year mission was achieved last night, with the winning of a prestigious national CIPR Excellence Award for a PR campaign, specifically for the Best PR campaign in the Travel, Leisure and Tourism sector.

Whilst other awards schemes aspire to be the Excellence Awards, to my mind, and to that of most PR professionals and specialists, these awards are peerless and won only by the crème de la crème. Having said that, I already have one – the national CIPR Excellence Award for Best Freelance PR Practitioner in 2012. I didn’t enter that category this year either, partly due to the huge fee attached to entry and but mainly because it was a campaign award that I really wanted. Catapult’s more into entering awards for small agency or creative team of the year in 2018, as we grow in our chosen way – actually influenced by a former client’s advice.

As it happens, I also have a runner-up certificate for a CIPR Excellence Award – in fact, in the same travel category – but I what I haven’t had was any recognition for the fact that I created, drove and realised a top financial services campaign, which my former employer entered for an Excellence Award after I had left to set up Catapult. That campaign, probably one of the most successful to ever be conducted for a building society, won an Excellence Award and my former employer took the credit and refused to give me any recognition for it. That stung, but it’s a dog-eat-dog world, I guess. So few prospective clients actually bother to ask whether the person who created a campaign is still with the agency.

The prospects of righting this wrong were looking a little dim. Some years, it’s just not possibly to even try for an award, as awards need a theme and dynamic that some clients don’t allow you to run with. At other times, the qualifying period in which work needs to have been conducted just isn’t right, with some campaigns not yet having reached maturity before the entry deadline. Sometimes, when you’re a small business, even cashflow can prevent you entering even a few categories. It’s hard to do, given the intense competition out there in the PR sector, not to mention the massive budgets that most agencies have to play with.

On that note, I really hadn’t expect to scoop the holy grail this year, given the fact that we were up against five London agencies working for Easyjet, Virgin Holidays, Legoland, Holidays.com and the National Trust. I didn’t even think I’d managed to convey all my points in the panel interview. But I must have communicated my passion for my client and for the county of Northumberland, as well as the fact that PR should be about focusing, in a blinkered way, on the objectives, and not always being seduced by the desire to go after flashy coverage that is not actually on-brief or useful.

We’ve been referring to this as a David versus Goliath feat. Considering how little budget we had, it can’t be regarded as anything else. I’ve always believed that there is nothing more powerful in PR than passion and I think that’s been vindicated. The campaign in question did leave me in tears a few nights, as I desperately tried to upload events to a template-based website whose functionality was horrendous, but it was worth it, to establish something in the Northumbrian calendar that has already grown and flourished this year. We’ve made history!

Last night’s moment of sunshine took place at the Royal Artillery Gardens in Chiswell Street, where the 2007 finals were held. It really meant everything when two of the judges sought me out, to congratulate me, with one saying that the moment I’d left the room, they all agreed that Catapult should be the winner, as all other candidates had already been seen. Apparently, I’d reminded them what great grass-roots PR should be. Given that establishing Northumberland Day at a grass-roots level was my number one ambition, I’m delighted by that comment. It’s for the people, of the people and delivered by the people. Passion infused it at every stage.

Of course, it also had creativity, in the form of the World’s Largest Stottie and the quirky ‘Northumbie’ Awards that reward dedicated participants. It also included the creation and launch of a ‘brand’ – another battle I had to fight when traditionalists tried to force me down the Lindisfarne font route. If you note the Northumberland Day logo, it was as I briefed it – containing a heart carrying the red and yellow markings of the Northumberland flag, used in place of the O in Northumberland. The brief I gave was all about conveying passion and pride. Now, even those who hated it think it’s the best thing ever! Now they do say that copying you is a form of flattery and it was interesting to see another set of Northumbrian awards replicating it in their branding, as if they’d invented it!

Last night was so brilliant, in many ways. I was accompanied by a former client, who I worked with 11 years ago and then, at the post-event casino tables, bumped into a Scot from Paisley, who not only knew my friend Nancy, with whom I worked at the British Gas HQ PR department In London, but had actually worked with her on his winning campaign! What a small world.

I must thank the nameless man who gave me £30-worth of vouchers for casino chips, as that definitely extended my time at the table! I must also thank the woman who met me as I made my way to the videographer, trophy in hand, and said her friend had said I deserved to win because I looked so glamorous! Given that I’d only just told my guest that my leaving card from an agency, whose head I also met last night, and for which I did some freelance work in 2015, contained the phrase “I shall miss your glamour in the office”, and that this comment still cracks my son up and is frequently mentioned, it was a tad ironic!

But the great thing about ending the 20-year mission is that it is in a 20th anniversary year that’s shaping up to be a watershed. I can’t believe the impact that the award win has already had and how many requests to connect I’ve had today. I think creativity and trophies are the currency of the realm this week, which makes me laugh, as one of our earliest clients, who always used to come to awards ceremonies, used to ask whether the prices were going up, every time we bagged an award! I think today that the value’s definitely gone up; not necessarily the fees!

This isn’t the only good news of the week, as we’ve also made it through, as a finalist, to this year’s BIBA Awards – the one they all want to win, as the strap-line goes. The BIBAs tour bus will be visiting in early July, with the judges visiting our new premises in Blackpool. Time to find a buddy for the night!

With award number 30 in the locker (and thank goodness, as I hate being on a weird number that isn’t nicely rounded or significant), it will soon be time to do what I promised if I reached this total and actually buy an official trophy cabinet. My dear web designer, Quentin, who’s been my web designer for a good 17 years, if not more, says he thinks it’s more a case of needing a trophy room, which makes me laugh.

Right now, we’re awaiting news of three new business pitches – and the prices haven’t gone up yet, so perhaps that might gee some along!

Tonight, however, I can stop thinking about the award I never received back in 1998 and thank the moon and the stars for the one I brought home today on the train – extremely heavy though it was. How nice it would be to do a ‘Cantona’ and bow out at the top. But, then again, I love my clients too much to do that.