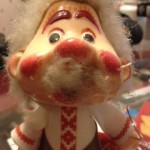 One of my ‘gifts’ from A Russian ‘All Star’ from Kiev!

People have been asking me how my book is coming along and the answer is ‘famously’!  I have so far written about 150 pages (single spacing) and am now in the mid-90s, having just left Swinton and headed into a PR consultancy role for the first time to launch Privilege Insurance.

This is such an incredible journey that I’m on and I’ve been discovering yet more people from the past!  My address book and ‘must do lunch’ list is getting longer by the day, which is a tad problematic when some of these people are in other parts of the country.   However, I’ve turned up a whole load in Manchester, so life should be fun, especially is one who endowed me with words of extreme wisdom,which have served me very well when it comes to resilience and never expecting too much of anything. He also literally saved my skin from a fate worse than death by threatening to grab someone by the throat and drop him off the fire escape if he didn’t take quick action to sort an issue out, but that’s by the by!

In the last two weeks, I’ve been through the great storm and evacuation of Olympia and its repercussions, (including having to rescue my friend Paul from a phone box in Pimlico!), death threats, the hilarious incident in a Russian restaurant off Baker Street (luckily Russian news agency TASS had departed by then!) caused by one colleague and resulting in another falling off her chair (just because of what a Russian gipsy Cossack dancer said to me) and my encounters with the Russian All Stars of Kiev in the Yang Sing in Manchester.  The little fella pictured here was part of what happened to me that fateful night after I’d been abandoned and left to my own devices by a colleague!  I am actually noticing a bit of a trend with the Russians who have crossed my path and we haven’t even got on to the main one yet!  There are so many incidents, I can’t possibly mention them all – just trying to be witty and self-deprecating throughout, as advised.

I just can’t stop clicking on my book cover design, as I absolutely adore it, so much so that I’m going to ask the designer in South Africa to do me another one, for a book that’s already complete and written for 8-12 year old kids.  Might as well make it an e-book, as it’s already finished and just gathering dust.  My former Italian teacher has longed to read this for a few years ago, so why should ‘Gianna’ disappoint her!

I’m going to sort out the ISBN number this weekend (or numbers now I suppose that I’m doing the other one too) and then I will be well and truly on the way to something exciting).

In the meantime, I’ve lots to keep me busy with the acquisition of new accounts and projects. Watch out for a gallery about the new exhibition ‘Their Colours and Their Forms: Artists’ Responses to Wordsworth”, which is set to appear on BBC North’s arts pages amongst others.  I must say that I have to give the ‘beyond the call of duty’ award of the week to my client Mr K, who has kept sending me info this week, even though he’s in Florida on business.  Last night I even got pics – and in high res – what’s going on!

Also watch out for Drybeck Farm in Armathwaite, which is to appear in Zest magazine and did you catch Lindeth Howe in the Telegraph’s Blue Monday piece?

It’s been a blue old week what with the weather and a few other pointless-worrying-about-them incidents, but the only way is up, up and away.  Waiting to hear about a few accounts, but have also had to turn a couple down due to conflicts of interest.  Unfortunately, when I’m gone, I’m gone!

Anyway, there is a little re-current theme that ends each chapter in my book and that is ‘It was time to move on”. Looking back, I’ve been extremely good at that (too good according to some of the people I’ve re-contacted lately), though I think it’s actually served me quite well in terms of the varied life I’ve had.  I’ll keep that thought in my head.