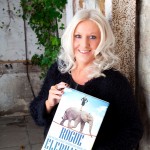 PR students embarking on a public relations course next Autumn and others returning for second and third-year courses can have a really good, funny read about the world of PR, while picking up tips from a multi award-winning PR professional.

Jane Hunt, the CIPR Excellence Award winner of the ‘Best Freelance PR Practitioner’ title in May 2012, has spent the last six months writing her book, ‘Rogue Elephants: One PR Girl’s Fight Through the Human Jungle’. The book describes her PR career, going back to the 80s and relays all the funny, serious and somewhat bizarre incidents that a life in PR can produce.

In the style of ‘It Shouldn’t Happen to A Vet’, the book is a witty read, full of incidents and happenings, but it also details the creative inspiration that has enabled Jane’s company, Catapult PR, win no fewer than 23 since 1998 and receive many more runners-up accolades and award nominations. Add to this awards that she masterminded in previous roles, plus all of her exciting in house work and it should give anyone who’s mind is set on a career in PR a lot of inspiration.

Catapult PR became NW PR Consultancy of the Year within 2 years and was later the Small PR Team of the Year. Jane became Best Freelance PR Practitioner in the NW in November 2011, before scooping the national title the following spring.  She is often asked to deliver PR seminars and talks and has written various PR training manuals.

PR course tutors wishing to give their students an interesting and creativity-boosting public relations read from one of the most creative PRs in the country can take advantage of a special bulk order offer that will reduce the cost per copy and avoid students having to pay postage with an online seller.  Tutors wishing to discuss this option can call Jane on 01253 891114.

‘Rogue Elephants’ will go on sale around the end of April 2013 and the full price is £9.99. Pre-orders are currently being taken.  To find out more email jane@catapultpr.co.uk