Alarmingly, I realised that Catapult PR will celebrate its 15th anniversary in March, having started from its former Marsh Mill offices in Thornton in March 1998.  I need to start thinking how to mark this milestone, as it presents a pretty big milestone.  As my friend and adopted son of Catapult, former BBC newsreader, Nigel Jay, once said: “Few PR consultancies have had the longevity that Catapult has enjoyed”.  Given the fact I was once described as the ‘eternal gipsy’, I’m not quite sure how that happened, but I seem to remember Jon Bon Jovi saying a similar thing at the Wembley Arena, back in the day.

But this raises the whole issue of anniversaries and how important it is for businesses to celebrate their milestone years.  In 2013, I am going to be very busy promoting the centenary of Beatrix Potter, Pigling Bland, as the author wrote this tale from Lindeth Howe in Bowness.  I’ve been putting together creative ideas for months and these should all now be rolling out in the early part of the year, with an official event in March. It’s all very different and pretty exciting so don’t dismiss it as ‘pigs might fly’!

This year, the 40th anniversary of my client Mountain Goat was marked with great success, with a heap of press and TV coverage emanating from various initiatives created.  I’m not quite sure that I envisaged being filmed by a TV crew standing on the top of a very cold Kirkstone Pass shivering without my coat on and with hair flying wildly around in a pretty stiff wind, but you have to do these things!  It was actually a really great day, as we re-enacted the first Mountain Goat trip from Bowness Pier to Glenridding.  Luckily, another client, Ullswater ‘Steamers’ had some hot chocolate for me at the other end and there was some delicious celebratory cake to tuck in to once we had cut it on the lakeshore.

The important part about anniversaries is to exploit them as hook for your PR and to really think through how you can bring the history, the achievements and the anecdotes from the past years to life.  It’s about engaging with your loyal customers who have shared the journey with you and the new customers that might just want to be part of your story going forward, once they know where you have come from and what you stand for.

Be creative in the way that you promote your anniversary and look at all possible angles.  I always feel that the more creative the approach, the more likely it is that you will get fabulous coverage. Delve into the past too and you will discover some wonderful and heart-warming stories, as we did with Mountain Goat.  These then give you more PR mileage as the basis for other stories.

If you are struggling to promote an anniversary, or think of creative ways of doing so, you can always give me a call and ask how I could help.  If it’s creative you need, I’m definitely your girl! 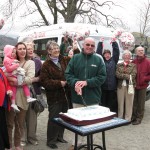