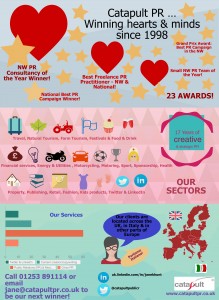 This weekend has seen me tackling my first Infographic – from a design point of view, that is!  Now I may not be au fait with many design techniques, but I do think I’ve a half-decent eye for layout, as I was, after all, forced to both write AND LAYOUT that iconic southwestern in-house publication – SWEB News, during my Utilities PR days!

Now while my great friend the Maltese Falcon starred in SWEB NEWS a lot in his earlier years (some would say excessively), and while being given access to the archives amused me greatly when I discovered what the young David had subjected himself, to get ahead in the SWEB empire, it was I who was suddenly given the Ems ruler and a book on how to lay out a page so that all the key ingredients were ideally placed, sized and fit together.  That necessitated a few tutorials in the back bedroom of the previous editor, Peter, in whatever part of dear old Bristol that was, but I did manage to lay out three very nice editions before leaving SWEB myself!

I’ve actually had great fun drawing Infographics – in my inimitable scribbly style – for other designers to tackle over the last few months, featuring everything from leaks from pipelines to buses and coaches on the road for an insurance PR client.  It caused a few laughs at my last meeting in Leeds, which reminded me of my son’s words when I tried to create drawings of my Befana Drama book characters … “You’re hopeless at Pictionary, so I don’t know why you’re bothering!”

Undaunted, I took to the controls yesterday, having had a Catapult PR Infographic in my head (where a lot of things reside!) before finally doing something with it.  Naturally, Catapult PR’s needs are not as important as my clients’ PR work, so I decided to DIY it.  I had enormous fun and, amazingly, lots of likes on social media (even from one of Leeds clients on LinkedIn!)

But what’s the point?  Well, Infographics quickly communicate key messages in an instant, without requiring people to read reams of copy. They are an easily digestible, compelling narrative, even if they don’t appear to be about narrative. The PR skill is marshalling those key messages, or soundbites about your company or organisation, and then interpreting them in a design (where my SWEB News days come in).  Thinking of the theme is important, but once you’ve gathered all your ammunition, it really is a case of getting going, or briefing in a designer and then using the Infographic as a key part of your PR.

They work because over 65% of people prefer to receive messages via visuals.  They are social media friendly and easily shared and passed around.  If you tactically include your key PR messages within an Infographic, the search engines will pick up on it and help your marketing.

You should try to tell a story with your Infographic and having a theme helps.  With mine, I’ve tied in to the PR consultancy’s 17th anniversary and looked back at what’s been achieved, while also highlighting sectors of PR expertise, PR awards won, the type of business handled (PR, copywriting, content creation, social media) and the geographical areas covered, showing that we may be a Lancashire PR consultancy, but our reach is far beyond Lancashire  – UK-wide in fact and in Europe too, in countries like Italy.  I even manage to get in the fact that we can speak Italian and include a Union Jack – which has a cachet overseas.

If you look carefully, you will see that the 23 PR and business awards that Catapult PR has won are each highlighted by a star, in the first block of information – a visual representation of number.  The word ‘block’ is important, as it’s good to group information in an Infographic, with each block telling its own story.  That’s what happens in mine.  When it sits in Facebook or Twitter, one of  the blocks neatly fits into the social media site’s ‘window’

There’s also a call to action at the bottom, but something truly beautiful at the top – a topical link to Valentine’s Day, with big red hearts that help sum up the essence of PR ‘ Winning Hearts and Minds’.  Clever?  I hope so.